As we planned another “long paddle” for this weekend with Chattajack peering around the corner, we decided that Saturdays are probably preferable so Sunday can be a recover and relax day.  We’d been invited to my parents’ lake association picnic midday (who  says no to that?) so planned to do a later afternoon paddle, starting at Chickamauga Dam, riding the flow into downtown, then proceeding to Suck Creek for about 17 miles total.  Hal and I had the good fortune of finally meeting Eula, who makes the world’s best fried pies.  I complimented her so many times that at the end of the picnic, she quietly told me that if I’d have my Daddy tell her when we were coming back, she’d make us a batch.  I love this woman. 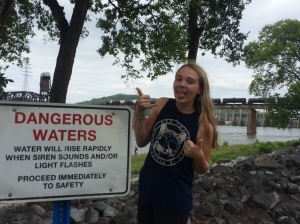 We headed for the meet up with three spare fried pies.  After board pickups, logistics, setups, shuttles, and the like, we were ready to hit the river.  Wisely, Fennel got lights out of her car as we’d likely finish just after twilight.  While I’d never paddled in the dark before, I knew it’s still be twilight when we finished – not like 10pm kinda dark – so I wasn’t that concerned.  WHEEE!  Off we went.  The river was a might squirrely, pumping anywhere from 27,000 to 47,000 cubic feet per second.  Great push, but not terribly smooth for the first two miles.  I think I spotted a bald eagle – he turned a few times, and I did not see the hallmark osprey flash of white – just a white dot for the head and one for the tail.  I was excited to see him circle overland to then come back out onto the river, until one of the many boats we’d see that afternoon sped by and spooked him.  Thanks.

A little family goofiness on the river. Always. AKA “before the headwinds came”.

Before we knew it, we were downtown.  I caught up to Fennel and Chris, and Adam was paused just ahead.  Hal and Kit pulled up and we did a little family goofing off with the GoPro, paddling under the bridges and alongside the LST 325, fighting the boat chop which was omnipresent but at least in organized waves.  Once leaving downtown to Moccasin Bend, it was just a washing machine. I couldn’t find a rhythm or a pattern to save my life.  The nose of my board felt like it was making figure 8’s and I had that um, I can’t do this for 9 more miles mental drama.  Paddle, repeat.  Paddle, repeat.  I scooted right to get out of some of the fray and thought, hey I bet this side/tailwind is gonna be in our face a bit around the bend.  I was hydrating well, had turned on one of my playlists on pocket speaker, and was snacking on Perpetuem.  Life was decent.

Paddling alongside the LST 325. Pretty cool.

I met up with Chris and we chatted for a bit which was great company around the long backside of the bend which is kinda ho-hum, in what for me is always the dreaded “third quarter” of any paddle.  Not the start stoke, not the halfway point, not almost done.  The third quarter.  I checked back to see Hal and Kit a bit behind us but appearing content and consistent.  The breeze started picking up.  The wind kicked in.  Before I knew it, Chris and I had abandoned much chitchat and were pretty much heads down into the headwind. 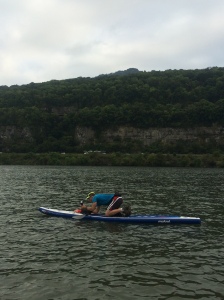 Chris grabs a quick snack around the Bend.

After about an hour of this joy, but feeling pretty confident in the effort I was putting in against the wind, I asked Chris if we could pull up for a minute and wait for Hal and Kit just to be safe.  He turned to watch behind us, I excused myself to the river loo, and I came to join him to wait.  And watch.  And wait.  And watch.  A few blows on our whistle.  Nothing.  At this point, it had been half an hour, and dusk had hit.  We had lights, Hal and Kit did not.  We had our phones, Fennel and Adam had phones, but Hal and Kit did not have phones (we generally paddle together, but had split naturally into three pairs on this paddle).  I was confident in everyone’s abilities but also knew Kit had been having a nagging hip issue and wondered if it had flared up.  It was starting to get dark, and quite cool.  I generally stick in a spare jacket but hadn’t that afternoon.  And I was about to go off my nutrition timing.  I peeled into my dry bag for a Hammer spare gel and offered one to Chris, who said he was fine but thanks.

<this part not authorized by Hammer Nutrition>

I stared down into the bag, expecting to pick between huckleberry gel and tropical, and saw them.  There, nested patiently and safely in a Ziploc, they were.  The three fried pies.  I squealed aloud and amended my statement to Chris.  “…but can I interest you in a FRIED APPLE PIE?”. Who says no to THAT?  He jokingly asked if they were warm, probably not thinking I was serious about my offer until I explained.  We split one and I really think even if just mentally, that fried pie might have saved me.  “Good.” I thought rather matter of factly to myself.  “If I have to sleep out here, I probably won’t starve.”  This was a bizarrely uplifting notion, and brightened my spirits.

</this part not authorized by Hammer Nutrition>

For the next half an hour, we went through scenarios of if they’d had to slow, stop, or turn back with a problem.  Lots of math, lots of looking.  Lots of whistle blowing, alongside our signature “ewwww-OOOP” call used on the water and during races.  I agreed with Chris’ suggestion to work our way back on the course for about 3/4 of a mile to just get closer to where we’d last seen them.  NOTHING.  In all honesty, I am pretty pleased with my emotional response and Chris’ pragmatism in the situation.  I plotted with Chris, let Fennel know the situation, and evaluated, at every turn tried to decide – what’s the right degree of concern here? The other note is that during this time, Kit’s mom texted asking if we were off the river. I shared that we were delayed due to wind, working our way alongside the bank close to shore, but did not want to worry her unnecessarily with the note that we’d been separated as I knew no matter what the situation, she was safely with Hal. Particularly to someone not on the river at the time or knowing the situation “your daughter and her Dad are currently missing at least from me” is not the message to convey until we had more data.

Somewhat reluctantly, we headed back to our original takeout plan, knowing that we could do little by finding them on river after dark, which it now was.  If we’d reached the takeout and they were not back yet, we’d act.  An hour and 20 minutes after we’d stopped, my phone rang. It was Hal, safely back at the car.  With a relief I probably wouldn’t fully grok until later, I shared with him that Fennel had gone to get her car, and left him to the logistics of that and planning post paddle food (fried pies notwithstanding, I was pretty excited for a real meal).

Chris and I began picking our way back into the still present but slightly less damning headwind, and we knee paddled for a bit as the chop was still enough to push the nose of my board underwater periodically.  Going in the water now, with paddled-for-13-miles-then-sat-for-over-an-hour muscles, and cool air temps, would not be a great plan.  By the light of one of the riverside plants, I could see the water and stood back up.  As I looked down, I saw a spotted gar dart under my board, illuminated by the spotlight, and smiled. 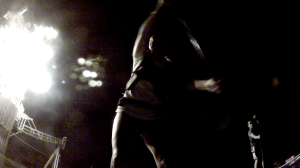 Slipping through the darkness. I felt like I was in an REM video circa Tourfilm days.

See what I mean?!

We stood for the rest of the journey as the winds relaxed a bit.  While the river was dark with no moon, it was a stretch with which I was familiar enough to actually be quite comfortable in the pitch black.  The ambient light from the occasional cement plant or house was enough to make out land forms, and the water became quiet at last as we pulled into the suck creek boat ramp.  Just before 10pm.  Chris shared a celebratory second fried pie, and I gave the third to Hal who’d been dutifully waiting for our arrival after Kit had been picked up.  A strong, fearless type, he later shared he was unsettled there: apparently there’s a lot of general activity around the boat ramp at night that he couldn’t quite make out.  Cars coming, going, slowing, people walking about.  Not the kind of place you want to have to hang out alone and sans food.

Illuminated by one of the barge docks. Otherwise? Pitch black.

Chris went on his merry way, and Hal and I went then on a relatively circuitous trek to find food.  After an unsuccessful meet up with Fennel and Adam at the Boathouse (whose kitchen, it should be noted, closes at 10 on Saturday nights), we ended up with a sackful of Krystals on the drive home and a bowl of cereal on the couch.

Honestly?  Not a bad way to spend a Saturday night.  🙂

1. Everyone has a cellphone on board, or does not stray from someone who does. Page 1, rule 1.
2. Changes in position on the river should be signaled when possible.
3. Even if plans are within 2h of dusk, take lights.
4. Take a jacket. I mean really, how much do they weight and honestly? Good padding in the dry bag for the fried pies :).
5. Stick to the original plan, then adjust if there’s a fail.
6. As we did, keep calm and find the humor in the situation, even when it’s going down.

Get Your Nutrition On!