In writing “about me” – the best summary is actually from my application for becoming a Hammer Nutrition sponsored athlete for 2014.  I think it sums it up pretty nicely.

In 2000, I embarked upon a total transformation from weekend warrior cyclist to triathlete, which involved literally learning to run and swim at age 30.  I worked with a great coach who told me about this “Hammer” company, and used Hammer products to enjoy a great multi season race career including several Olympic tris and a half ironman.  And then.  Marriage, moving, baby – all those life events that many athletes power through – happened, but to me with the added element of a divorce in the mix.  (Let’s just say I am pro multi sport, but not pro multi other things, as I found out the hubs was).  Everything stopped.  I focused on my son, my career, and starting a new consulting business.  I eventually remarried, and did a sprint tri locally and my husband did a few but I just didn’t “feel it”.  I felt like my comeback attempts were trying to get back to the ‘me’ I was before, and I wanted to be something entirely new.  My competitive spirit just wasn’t in me, and I chalked it up to everything I’d been through.

And then, I got on a paddleboard.  Everything changed.

My husband and I bought a multipurpose board and began paddling a lot on the local lakes here, taking turns and even ferrying around a toddler son, a pre-teen stepdaughter, and/or several corgis.  For my 40th, I got a second board, and off we went.  For a season we enjoyed local waterways, dragged the boards to Florida as a family, and had a great time.

But then.  Out of nowhere, it came back.  That itch to compete.  To push.  To improve.  I signed up for the last race of the 2012 season here locally, a 2 mile beginner course,  and with that all-too-wonderfully-familiar race morning feeling of joy, almost nausea, and excitement, I got on the water.  The elites went first on their 6 mile journey and I thought – wow.  Someday.  Maybe, someday, I can do that.  Then we were off, and I pushed and pushed myself until coming back to the finish line I could barely feel my legs.  I was worn out, every muscle, every cell of my body – done.  It was fantastic.  I finished fourth – just out of the hardware.  And then I saw the list.  I beat 14 people.  That was the gut hook moment.

I started the 2013 season with one goal and one goal only (which as any athlete knows, it’s easy to get distracted or take on too much based upon what everyone else in your group might be doing).  That goal has been to race the 6 mile elite course again at River Rocks this October – despite the fact that I will be doing it on a surf class board again.  At the start of the season, I questioned my sanity.  Suuuure, surf class folks do 2 and 3 mile courses, but not 6.  I surprised myself at my first 3 mile race and placed second (later corrected to third on the books) and thought, that’s great.  NOW WHAT.  My next race I signed up for the 6 mile, “just to see”.  And here I am,  three weeks out from my A race and goal race for the year, not “wondering” if I can complete it, but knowing – with 4 6+ mile races already under my belt – just how fast I can do it.

I truly believe that using the Hammer product line has helped me get to where I am, and will get me into my 2014 goals.  Throughout my race seasons, I have advocated Hammer’s amazing products and results for me,  and feel that as both an evangelist for the sport of SUP as well as for the Hammer products, I am the perfect candidate for sponsorship from Hammer.  Your logo is already on my car and half my wardrobe, I’d really like to see it on my new race board next season.

Get Your Nutrition On! 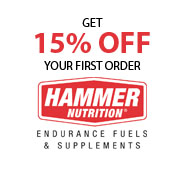